1) Why should fishermen care about ocean acidification? 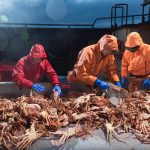 Ocean acidification (OA) has the potential to harm marine ecosystems that are the foundation for Alaska’s abundant commercial fisheries. Even small changes to ocean chemistry can have significant consequences for fish and shellfish, or their prey. Lowering the pH of seawater may affect the ability of shell-building organisms (such as crab, oysters, and some kinds of zooplankton) to build and maintain their shells and may also affect the ability of marine fish and invertebrates to regulate their internal pH., which is important for maintaining physiological functions.  As ocean conditions change, we will also need to adapt our industries and the ways we rely on the marine environment.

2) What might the specific impacts be to commercial fish species? 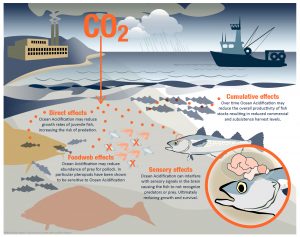 This infographic from NOAA AFSC shows indirect effects of OA on fish.

As with any large shift in marine conditions, biological consequences will vary across the range of species. Some species will be winners and others losers. So far, based on laboratory experiments, researchers expect reduced survival of commercial king crab, southern Tanner crab, and rock sole in ocean acidification conditions forecasted for the future. Snow crab, Pacific cod, and walleye pollock have shown more resilience to ocean acidification.  However, marine species may also be compromised by impacts on their prey and the marine food web overall. Some fish experience behavioral changes in acidified waters, such as changes to their sense of smell and ability to avoid predators. Over the next few decades, the combination of ocean acidification and additional environmental stressors, such as freshening from melting glaciers and warming waters, may significantly alter marine habitats and could fundamentally change the structure of food webs that will affect commercial fisheries.

Pteropods are an important prey species for pink salmon.

3) What do we know about OA and salmon?

Pteropods (tiny marine snails that are a kind of zooplankton) are an important prey for salmon. Field studies conducted along the U.S. West Coast and in the Gulf of Alaska show that pteropods are already affected by ocean acidification.  Corrosive water conditions cause the shells of pteropods to dissolve.  This can result in increased mortality, especially when acidification is accompanied by additional stressors, such as freshening from melting glaciers or warming water temperatures.  Salmon in other regions have also been found to change their behavior in low pH environments.  More targeted research is needed on how the changes in the predator-prey interactions will shape ecosystem composition and function, and what those changes mean for salmon.

4) Is ocean acidification a problem that will affect my fishing business now?

Our waters are already becoming acidic enough to cause carbonate minerals to dissolve during certain times of year in certain locations (although not corrosive enough to dissolve hardier materials, like boat hulls). Some commercial fisheries such as brown crab fisheries in the Aleutian Islands already occur in naturally acidic waters found in deep (>600 ft) waters off Alaska.  Our concern is for shallow species that have not yet experienced or adapted to ocean acidification. Even though continued research is needed to understand the complex ways that acidification may affect our fisheries in Alaska, experimental laboratory research on the response of marine species indicates cause for concern. We need to explore how acidification might affect our ecosystems and fisheries so that fishermen can innovate and build resilience to emerging risks. Research and understanding of current and future projected conditions is like putting headlights on a car so we can see ahead and know what to anticipate as this problem intensifies. 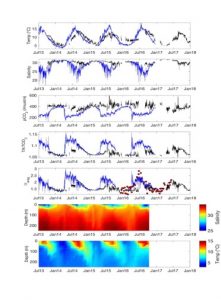 This image of carbon parameters from locations in Southcentral Alaska illustrates season fluctuations.

5) Doesn’t the pH in the ocean change all of the time anyway?

Natural variability is an important consideration in understanding the extent and duration of acidification in Alaska waters. As fishermen know from experience, the ocean is not uniform — temperature is different year-to-year, currents and movement of water masses change, timing of conditions fluctuates, the fish are not always in the same place. Variability in the location, timing, and duration of acidified water is caused by many natural factors, including local and global circulation processes, seasonal cycles like phytoplankton blooms, sea ice, and river discharge. Often, corrosive conditions result when natural processes that produce CO2 are all in sync, and then have anthropogenic CO2 added on top. This extra CO2 pushes the system past important thresholds. Using an array of technologies, our research shows that corrosive conditions are most prominent during late summer, fall, and early winter, especially in bottom waters beneath very productive areas, and near river outflows. Sometimes, this can overlap with important life history stages for commercially valuable species.

6) What research questions are scientists focusing on?

Oceanographers have focused on measuring pH and the saturation of carbonate minerals to monitor corrosive water conditions. Ongoing monitoring at different geographic scales is critical to assessing water quality, identifying trends, and improving forecasting to inform the management of commercial fisheries.

In Alaska, scientists have focused on the effects of acidification on key species because of their role in the ecosystem (such as pteropods) or their value to commercial fisheries (such as crab, pollock, and flatfish). Research questions have been focused on the direct impacts on the physiology of marine species and on subsequent population level effects. Emerging research topics will investigate indirect effects on food webs and the combined effects of acidification and ocean warming. Studies on additional species such as salmon also need to be conducted.

Forecasting the impacts of ocean acidification is also important. Current research focuses on linking population models with economic forecasts in order to address the vulnerability of coastal communities and sectors of the seafood industry, and to assist with adaptation. Currently, researchers are working to add ocean acidification into much larger food web models in order to expand this effort beyond the single-species level. 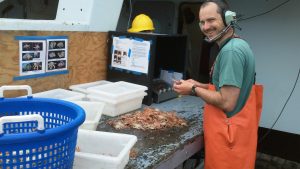 Chris Long at the NOAA Laboratory in Kodiak is part of a team looking at the effects of OA on crab.

7) How can the fishing industry support ocean acidification science?

8 What are some examples of community-based monitoring programs in Alaska?

9) Researchers and fishermen are eager to share ideas. How can fishermen have input in research questions?