With just over six months of data, an Alaska Marine Highway System ferry project has already begun documenting the unique ecosystem interactions at play along the coast of Southeast Alaska. The project’s current mission is to understand present-day conditions with respect to ocean acidification, how levels change seasonally, and where there are hot spots or refugia from corrosive waters. This basic information is important for management of marine resources, and when collected over a long enough time, allows scientists to estimate the rate at which ocean acidification is occurring in near-shore Alaskan waters. 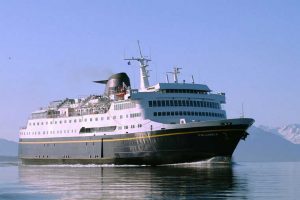 The M/V Columbia set sail in October 2017, beginning a continuous year-long service schedule and carrying onboard a scientific payload aimed at measuring surface seawater parameters related to ocean acidification over the vessel’s expansive near 1000-nm transit between Skagway, Alaska and Bellingham, Washington. Every week, the Columbia services seven communities in southeast Alaska (Ketchikan, Wrangell, Petersburg, Juneau, Skagway, Haines, and Sitka) before sailing across the entire Province of British Columbia to Bellingham, Washington, where its journal begins and ends every Friday. The extensive spatial coverage of the vessel, combined with the high frequency of transits, makes the dataset collected onboard unprecedented in terms of capturing the variability in the marine environment across a giant swath of nearshore ecosystems – documenting ocean acidification from the Salish Sea to Alexander Archipelago.

While the data collected thus far are preliminary, they point to a dramatically variable seascape that until now had only been documented by the infrequent passes of research vessels and instruments in fixed locations (a mooring and shore-side facilities). Shown here is the saturation state of aragonite, an important mineral that is a type of calcium carbonate used by certain species of shellfish and plankton to make shells. The saturation state is a ratio, and when values are above 1, conditions favor the production of shell material. When values are below 1, conditions favor dissolution and seawater corrodes this mineral. 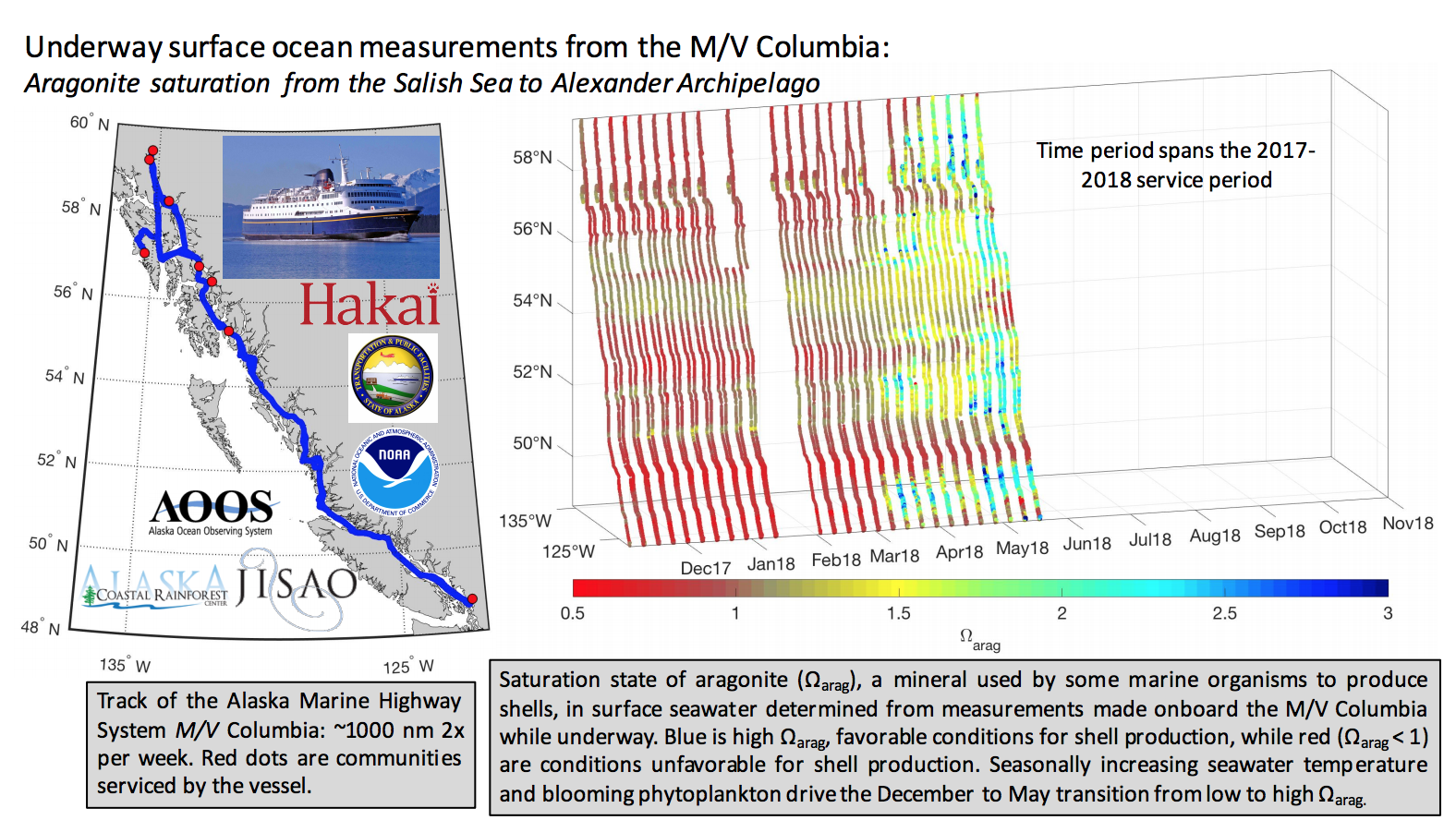 As can be seen in the data, the surface water is primarily corrosive in fall and winter, representing the most vulnerable time of year for species sensitive to ocean acidification.  Then with the onset of spring, two primary factors create a change: the spring phytoplankton bloom removes CO2 from the water through photosynthesis, and the water gets warmer (making aragonite less soluable). The impact of these changes are visible in the graph.

So what does this mean for Alaska?

These seasonal changes are naturally driven, however, Alaska waters are vulnerable to surpassing key thresholds.  Shelled marine life that utilize aragonite have evolved strategies to cope with saturation states below 1, either by avoidance or adjusting their energetics in a way to protect their shells. Conditions below 1 occur naturally, deep in the water column and in nearshore surface water affected by rivers or ice melt. However, ocean acidification makes these conditions worse and is slowly decreasing the occurrence of good saturation state levels. The rate of this decrease in Alaskan waters is yet unknown and likely varies across the state’s extensive marine environments. The impact of this decrease can push shelled marine life past thresholds they are adapted to handle, as has been seen already in a number of locations globally.

With the help of many, especially the Alaska Department of Transportation, data collection aboard the Columbia will continue through years to come and be one of many vital resources used to understand the trajectory of ocean acidification in the State of Alaska. 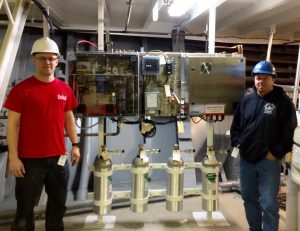 Wiley Evans of the Hakai Institute (left) and Geoff Lebon from JISAO/NOAA PMEL (right) stands in front of the carbon measurement system on the Columbia’s car deck. Wiley serves as the PI for the project.