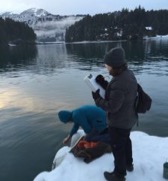 Community members gather water samples in Seldovia to be analyzed at the Alutiiq Pride Shellfish Hatchery in Seward.

Alaskans from Seldovia to Valdez have joined the effort to better understand how OA is affecting coastal Alaska. With the help of citizen scientists and several research programs, there is now over a year of data from nearshore locations in Prince William Sound and the Kenai Peninsula, extending monitoring coverage beyond the scope of periodic oceanographic research vessels. The data collected by communities is feeding into a growing repository used to assess OA in Alaska.

Is the water around my community corrosive?

When talking to Alaskans about ocean acidification, questions about local impacts are often the first to arise. Wiley Evans of the Hakai Institute, a lead researcher on the project, prefaces the latest research findings by highlighting the challenges of a dynamic system.  “Right now we are working on documenting baseline conditions,” he says.  “What we are recording is essentially ‘carbon weather’ – how corrosive are the waters right now, and how do they fluctuate on a seasonal basis.  At this stage we are learning that some areas are experiencing more corrosive water than others, but we don’t yet know how much of it is due to human-generated CO2 and how much is driven by natural influences. Over time the goal is to tease out the trend and measure the rate of change.” 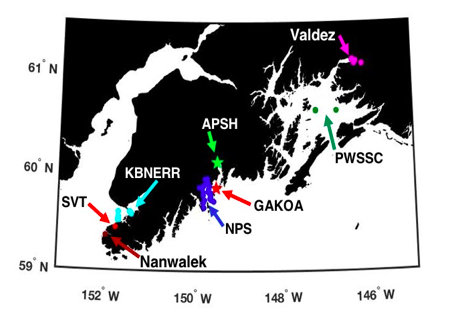 Tracking conditions at multiple locations within a region and looking for hotspots is a place to start. To participate in the community monitoring effort, volunteers in each community have been collecting water samples and sending them to the ocean acidification lab at the Alutiiq Pride Shellfish Hatchery for analysis.  There, a Burke-o-Lator measured the total amount of inorganic carbon (TCO2), partial pressure of carbon dioxide (pCO2), temperature, and salinity to calculate the aragonite saturation state (ΩArg), which is a measure of how corrosive the water is to the carbonate mineral aragonite that is used by some organisms to produce shells. While ΩArg < 1.0 is considered corrosive, ΩArg < 1.5 can be stressful to some species of juvenile shellfish. 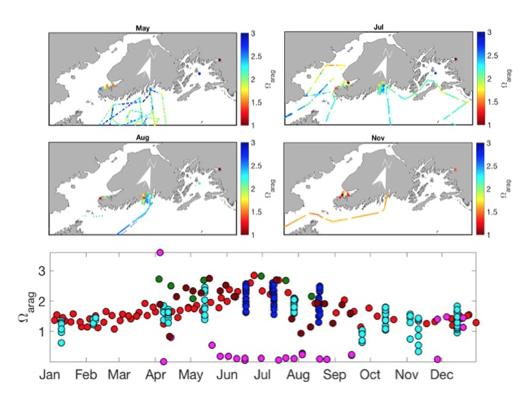 Top Panels: The top four panels represent aragonite saturation levels from research vessels (lines) as well as citizen science data (points). Warmer colors mean more corrosive and cooler colors mean less corrosive.  Bottom panel: this graph shows ΩArg differences between the citizen science groups over 2016. Coloring is consistent with the map locations above. Note the ΩArg dips below the 1.5 threshold for sensitive species during fall and winter months in some communities. Note: Valdez data deviate significantly from this trend because of the very low salinity conditions at the site. Seldovia Village Tribe had the most comprehensive dataset over the whole year due to their dedication to weekly sampling at their dock. KBNERR and NPS went on day-long cruises and collected their data from different stations, thus their data appear stacked for those sampling days.

Several new findings have emerged from the first year of research:

Scientists are observing more corrosive waters during certain times of year. The general seasonal trend indicated by the data depicts higher ΩArg (less corrosive water) during summer months when primary productivity is higher and pCO2 is being drawn down by photosynthesis. Conversely, lower ΩArg levels (more corrosive water) are observed during winter months when rates of primary production have dropped off and strong storm-induced mixing of the water column is occurring. This can be seen on the lower panel at [left/right].

Data from research vessels don’t always reflect nearshore conditions. With the data collected so far, manifestations of OA vary considerably over the Gulf of Alaska nearshore realm. Specifically, surface data from this citizen science program revealed instances of ΩArg < 1.0 that have yet to be see in surface observations made on large research vessels in the region. This underscores the importance of nearshore sampling to enhance the understanding of baseline trends.

The community sampling approach is working. While citizen science can have its challenges, the proof-of-concept for community-based sampling for ocean acidification research in Alaska appears to be fruitful.  Researchers are seeing high value in the efforts by community members based on the quality of data returned and the new information generated. It has also sparked community interest and engagement on a topic of local importance.

While Southcentral Alaska continues to build a time series of nearshore data, other communities around the state are gearing up to start sampling programs as well.  The Alaska OA Network’s Tribal Monitoring Working Group has been leading an effort to increase local monitoring, and the communities of Hoonah, Yakutat, Petersburg, Wrangell, Ketchikan are up next to join with the support from SEATOR and the Sitka Tribe.  There is also a new effort funded by the U.S. Arctic Research commission to expand water sampling in the Arctic to the communities of Nome and Kotzebue, and plans for starting community sampling around Kodiak Island.  If your community is interested in participating in an ocean acidification sampling program, contact working group leader Davin Holen at dlholen@alaska.edu.