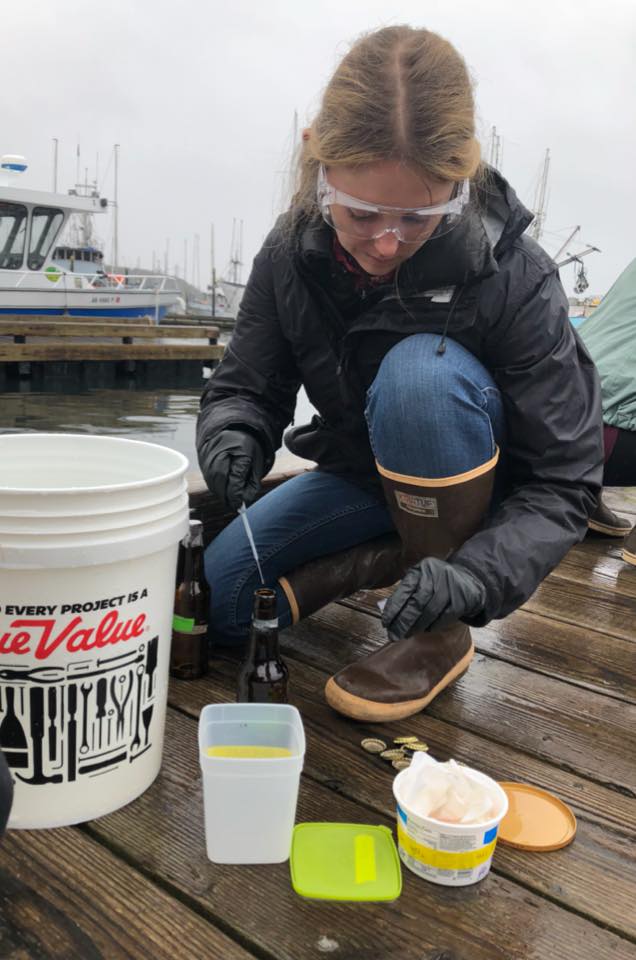 Kim Wickman, the IGAP technician for the Wrangell Cooperative Association, collects water samples in at Shoemaker Harbor in Wrangell.

Building on an established Tribal network, a number of new communities are now taking part in a weekly sampling program that is providing baseline data on conditions in Southeast Alaska.  Juneau, Wrangell, Hoonah, Yakutat, and Kake are currently collecting ocean chemistry samples, and Craig, Ketchikan and Petersburg are expected to begin as well.

The network is part of the Sitka Tribe of Alaska’s SEATOR program (Southeast Alaska Tribal Ocean Research), and coordinated by Esther Kennedy. “We have a harmful algal bloom and biotoxin monitoring program already in place where members from 16 different communities send weekly shellfish and plankton samples and ship the shellfish to  our lab,” Kennedy said. “Adding water sampling for ocean acidification was a natural extension, as both are issues our partner communities are concerned about.”

At the lab, the samples are analyzed by a Burke-o-Lator, a system that measures a suite of CO2 variables and allows scientists to start tracking baseline levels and seasonal cycles.  This data, along with data from the instrumented Alaska Marine Highway Ferry M/V Columbia, will begin to paint a picture of what’s going on in Southeast Alaska with respect to ocean acidification, including hot spots and seasonal change. Since it takes years to build up a time series to assess rate of change and conditions can be different within a region due to local influences, the broad geographic coverage from the community programs provides an important start.

Kim Wickman, the IGAP technician for the Wrangell Cooperative Association, started collecting samples in February from Shoemaker Harbor.  Adding the water sampling regime to her weekly fieldwork was not a heavy lift.  “Initially, it took about 20 min to collect our OA samples; now it takes about 10 minutes or less. It was very easy for us to incorporate the OA sampling into our weekly plankton sampling routine,” Wickman said.

The biggest challenge, however, was unexpected. “We had a really hard time finding amber bottles. The bars offered to let me ‘dumpster dive’, which obviously was not desirable,” laughed Wickman. “We finally ended up with an easy and reliable source via a retired root beer brewer for our bottles, but it took a little leg work.”

Improving community awareness of the issue is an important role of the program across communities as well. “We hope to pass on the knowledge we gain through water sampling to our tribal citizens and the community of Wrangell,” Wickman noted.

The Alaska Ocean Acidification Network coordinates an OA Tribal Monitoring working group with members from Southeast and others from around the state, including a network of sampling programs in Southcentral Alaska led by Alutiiq Pride Shellfish Hatchery. This summer, water sampling is starting up in several Arctic communities as well (more in the September eNews).  If you are interested in getting involved in water sampling in your region, please contact Davin Holen at Alaska Sea Grant (dlholen@alaska.edu).