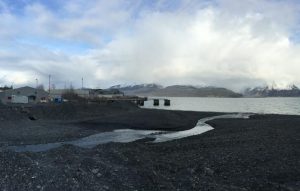 The Alutiiq Pride Shellfish Hatchery is located next to the Alaska SeaLife Center in Seward.

One of the challenges of monitoring ocean acidification in Alaska is the sheer amount of coastline and the variation in conditions across geography.  This can be due to local circulation patterns, freshwater run-off, depth, tidal dynamics, and other factors. As baseline data is recorded at specific sites, researchers are beginning to answer questions such as “if I know conditions here, can I predict them over there?”

Ongoing research in the Seward area is exploring these questions, where a continuous carbon monitoring system (called a Burke-o-Lator) has been tracking carbon parameters from 75m depth at the Alutiiq Pride Shellfish Hatchery since 2013. The Burke-o-Lator measures variables used to identify whether the incoming seawater is corrosive – levels that may be stressful to certain species of young shellfish.  Researchers are now comparing the data from the Burke-o-Lator at the hatchery in Seward with a surface mooring (known as GAKOA) 28 km away at the mouth of Resurrection Bay. They are also beginning to compare the data with samples collected by citizen scientists in communities around the region through a program hosted by the hatchery. 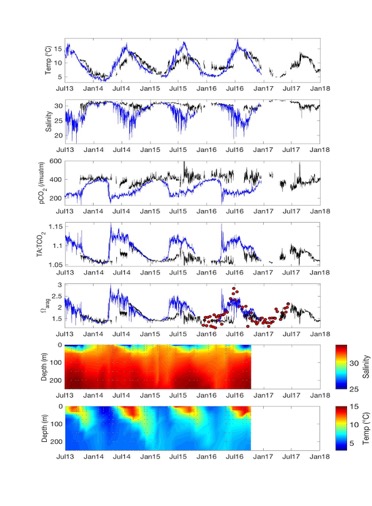 Time series of the Burke-o-Lator (black) and GAKOA mooring (blue) for temperature, salinity, pCO2, TA;TCO2 and Ωarg. Seldovia data is also overlaid on the fifth panel. The bottom two panels show salinity and temperature data through the water column from a station adjacent to GAKOA. Seasonal fluctuations are apparent for all variables and locations. Graph from Wiley Evans.

The comparison between the Burke-o-Lator data and the GAKOA mooring show the Burke-o-Lator can reveal trends applicable beyond the hatchery and may be able to track the conditions of the upper water column elsewhere in the region during winter – the time period when perhaps the ocean acidification trend may be easier to identify from the natural background variability.

The more researchers can learn about the relationship of conditions in different geographic locations, the better they can understand the drivers behind nearshore ocean acidification and provide an outlook for what local communities can expect in the future.  Community sampling programs are beginning to expand under the coordination of the Alaska OA Network’s Tribal Monitoring group.  You can read more about findings from community sampling efforts.

More nitty gritty on the Burke-o-Lator 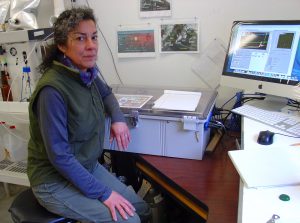 Jacqueline Ramsey runs the Burke-o-Lator at the Alutiiq Pride Shellfish Hatchery in Seward. Burke-o-Lators have the ability to monitor the continuous flow of water coming into a hatchery, or to assess discrete samples taken from other areas in the region.

“Burke-O-Lators” have become a gold standard for near-shore analysis of ocean acidification conditions. Named after their developer Burke Hales of Oregon State University, they track aragonite saturation, or the suitability of ocean water to form calcium carbonates that shellfish use to form their shells.  The Burke-o-Lator at the Alutiiq Pride Shellfish Hatchery in Seward has continuously monitored incoming seawater from a depth of 75m in Resurrection Bay since 2013. It tracks real-time CO2 system parameters (partial pressure of CO2, pCO2; total dissolved inorganic carbon, TCO2) and in-situ temperature and salinity. Using these measured parameters, researchers are able to calculate aragonite saturation states (ΩArg) that are used to identify if the incoming seawater is corrosive (ΩArg < 1.0) or at levels that may be stressful to select species of juvenile shellfish (ΩArg < 1.5).  The Burke-o-Lator also analyzes water samples from seven communities around lower Cook Inlet and Prince William Sound, thanks to a citizen science program run by Alutiiq Pride with funding from the Bureau of Indian Affairs.