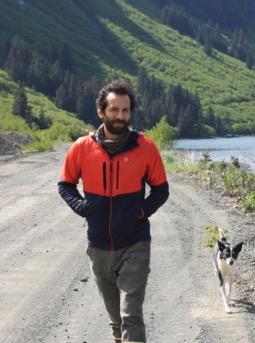 Cale Miller is a PhD student at UC Davis who has been studying ocean acidification in Kachemak Bay with Dr. Amanda Kelley at the University of Alaska Fairbanks.

Q: Tell us a little bit about yourself and how you came to study OA in Alaska

I was first introduced to OA research during my undergrad at Oregon State University, which just happened to be my first ever research experience. I continued on the OA path during my masters where I gained more insight of the research objectives and direction of the community: coastal and ecosystems vulnerable to high OA impact. From this perspective, Alaska was an obvious location as it was lacking preliminary information on the response of native Alaskan species to OA, and an understanding of coastal OA dynamics. Alaska is at the forefront of rapid change with respect to OA due to its oceanography and geography. After completing my master’s work at Western Washington University, I took a position in Dr. Amanda Kelley’s newly established lab at the University of Alaska Fairbanks as a research assistant. My role as a research assistant was to assist in several experiments examining juvenile bivalve response to OA, and develop operating procedures for autonomous pH sensor data analysis. Several of these experiments were carried out in partnership with the Alutiiq Pride Shellfish Hatchery in Seward, AK.

Q: What drew you towards this topic, and what has your focus been?

I was first intrigued by the applied aspect of the research. I was captivated by its orientation with climate change, and liked how there was a potential to bridge biology and chemistry. My initial focus around OA dealt with the shell building response of oysters, clams, and mussels. My research since this time has shifted toward how biological photosynthesis and respiration modify acidification on short time scales in nearshore systems. This usually involves the deployment of autonomous sensors, or putting on waders, getting stuck in the mud, and filling bottles of water. 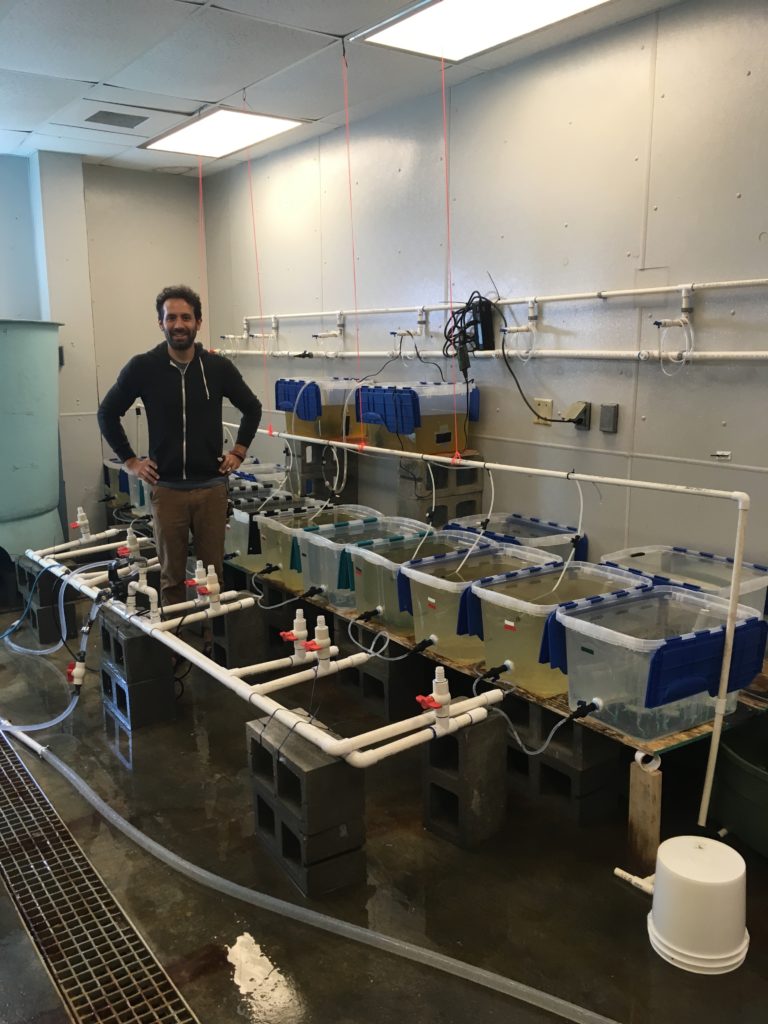 Q: A new OA lab was just set up in the Kasistna Bay Laboratory.  Tell us about it, and your role in the effort.

In May of 2019 I was part of Dr. Amanda Kelley’s team to install an ocean change experimental system (OCES) at the Kasitsna Bay Field station. This work was funded by an NSF facilities improvement grant with the goal of providing researchers both within and outside Alaska to carryout pertinent multi-stressor studies. The system has the ability to manipulate temperature and CO2, salinity and oxygen concentration, and combine various treatments for those interested in doing multi-stressor experiments. The versatility of the system allows for treatments to be static or variable depending on the question the researcher wants to ask. I have set up a portable version of this system multiple times with Dr. Kelley when collaborating with the Alutiiq Pride Shellfish Hatchery, so having this as a permanent install at Kasitsna Bay is real step forward for Alaska OA researchers. My role for this install was to set up, calibrate, and write protocols and calculation spreadsheets for the analytical instruments used to measure pH and alkalinity. These instruments are top-of-the-line, and provide a real benefit to researchers conducting experiments on the OCES to produce water chemistry data in real-time.

Q: There’s been a lot of interest in the potential for sea grass or kelp to help mitigating OA on a localized scale.  I understand you started a project in Jakalof Bay looking into the effect of sea grass on carbonate chemistry.  Can you tell us more?

Yes, this certainly has been a hot topic of conversation the past few years. The underlying notion is that macrophytes such as kelp and seagrass are able to raise pH during daylight hours by taking up CO2; but these systems create rich habitats for other organisms who breathe CO2, which amplify the input of CO2 to the system relative to non-seagrass habitats. That is, these systems rich in CO2 result in asymmetrical responses to the input and output of CO2. This scenario creates an exacerbation of extreme acidification conditions on daily time scales. There is also the effect of residence time which influences how quickly biologically modified water mixes with oceanic source water, which can potentially dampen any high pH signals created by seagrass photosynthesis. The other thing you here is that increasing anthropogenic CO2 will increase seagrass photosynthetic rate and growth, but some of my previous research has shown that you really have to hit the system hard with CO2 to see that benefit. This is due to how CO2 is bound to oxygen and hydrogen under present day and predicted end of the century CO2concentration, as well as the ability of some seagrass species to utilize other forms of bounded CO2. So, I would be very hesitant to say that we will see an increase in photosynthetic rate by seagrass, or that there may be seagrass expansion within this century given the current projections of CO2 increase by the end of the century. 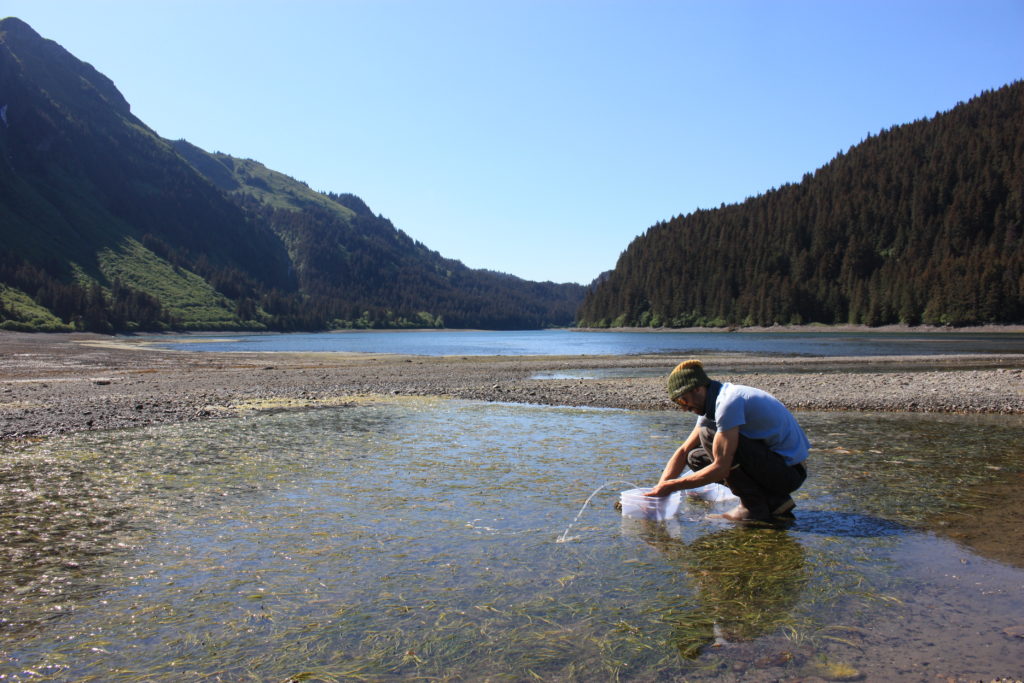 Last summer I located 3 pools within 50 m of each other in the high intertidal zone of Jakolof Bay that were either dense, patchy, or lacking seagrass. It was an ideal system to compare pools and identify how seagrass may modify CO2 on the tidal scale. My first question was what could be driving the disparity between seagrass density, and how quickly, and to what degree, is the CO2 chemistry modified. Most of the research to date has taken the approach of deploying an autonomous pH sensor in seagrass beds, but pH is only one parameter relating to acidification, so I sought to measure several parameters on a high-resolution time scale.

Q: Did your results show any surprises?

Yes, preliminary results show a decoupling of the chemical system we identify with acidification, and this effect becomes more extreme the longer the residence time. For example, if I were to just measure two parameters and calculate the other chemical parameters (which is typically standard practice), the calculated value would be far off from what I actually measured. It was pretty shocking to see how rapidly some of these parameters changed. I am just beginning to work up the data, so you’ll have to check back in later so I can give an update. I think a take away at this point, is that measuring just pH is not giving us the whole story, and hypothesizing how seagrass or kelp may potentially mitigate OA needs to be more nuanced by describing the whole system identified with acidification, rather than just pH.

Q: What’s your level of hope for sea grass or kelp as a mitigator?

Currently, I am very skeptical for the reasons I have stated above. I came into this question a few years ago as a proponent for seagrass OA mitigation. But based on my own research and that of others, my perspective has shifted against this potential benefit of seagrass or kelp as a solution to OA over the past couple years.

Q: Do you have any particularly memorable moments in the lab or in the field?

I think one of my most memorable moments doing field work was in 2015 when I was a master’s student, and my lab at WWU was collaborating on a project with Washington State DNR investigating eelgrass habitat for oyster larvae. We would paddle out in the middle of the night on kayaks and anchor ourselves down while pumping 5 gallons of water into a bucket situated on my lap. This took about two hours, and as the sun broke, I would watch the crows torment the bald eagles just on shore. It was honestly quite a spectacle to see crows dive bombing bald eagles that invaded their space. There was something quite peaceful about this experience that I really appreciated.

Q: Do you have any advice for someone thinking about graduate school in the field of ocean acidification? 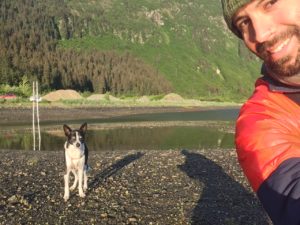 The OA field has really shifted away from running single stressor experiments on organisms. Areas  gaining traction are looking at multi-stressors, impacts of OA variability on sensitive life-stages, and sensitivity projections. I think the latter is an area that’s really lacking, but seen as the next step. For example, OA researchers are partnering with aquaculture industry as a means to improve industry output. That is, improve conditions for shellfish affected by OA. This entails developing sensitivity projections – essentially models that can take current acidification “weather” conditions, and provide real-time analysis of potential harmful current conditions. We are definitely not there yet, but there are a few people working on this issue. In Alaska, the first step is to improve our monitoring capabilities and infrastructure, particularly in estuaries if we are talking about shellfish aquaculture. I see these as good directions to go if looking to get into OA research.