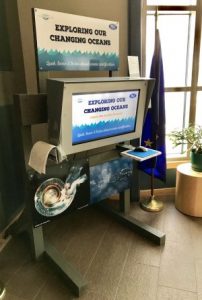 An ocean acidification touch-screen kiosk, developed by the Alaska Marine Conservation Council, currently resides in the Cordova Center. The kiosk has been stationed in Homer, Kodiak and Sitka in the past year.

The local radio station out of Cordova, KLAM, aired a 1-hour show on October 30, highlighting ocean acidification in Alaska, the science behind the issue, perspectives from the fishing community, and resources from the network.

Listen to the show