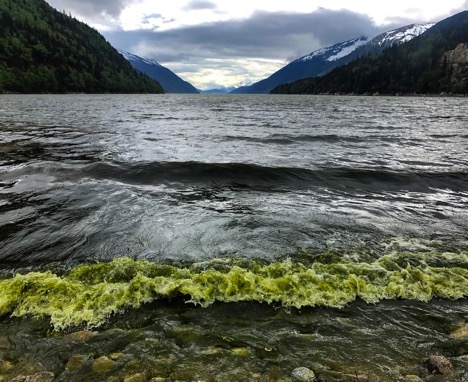 Harmful algal blooms are caused by phytoplankton — microscopic, plant-like organisms that are present in all the world’s oceans and major bodies of water. Like plants, most phytoplankton get their energy from sunlight, consume carbon dioxide, and produce oxygen. They are estimated to produce more than half of the world’s oxygen and form the basis of the marine food chain. When phytoplankton are exposed to the right conditions they can “bloom”, or multiply extremely rapidly. In general, more phytoplankton means more food and oxygen for everything else in the ocean, but occasionally plankton blooms are hazardous to human or marine life. These are known as “Harmful Algal Blooms” or HABs.

While all phytoplankton blooms are good for some organisms and bad for others, HABs are typically defined by their impacts to humans, their property, or the marine animals or resources that we care about. Harmful blooms come in a variety of different forms. Some produce toxins that directly poison humans, marine mammals or fish. Some algal genera have sharp spines that mechanically damage fish gills. In especially dense blooms of other phytoplankton species, opaque or dark-colored cells can make it difficult for marine predators to find prey. The collapse of large blooms can can also sharply reduce oxygen concentrations in the water. HABs occur around the world and in all months of the year, although summer blooms are the most common. 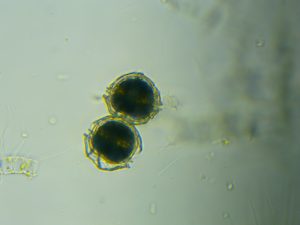 Alexandrium is the cause behind paralytic shellfish poisoning, or PSP. Photo: KBNERR

Alaska’s most well-known and destructive HABs are caused by two phytoplankton genera that can produce lethal toxins.

Alexandrium produces saxitoxin and an accompanying “toxic cocktail” that causes paralytic shellfish poisoning. Alexandrium is the culprit behind cautions about “red tide”, although blooms can be deadly long before any color is visible in the water. Paralytic shellfish poisoning has killed or sickened people and marine mammals from Southeast Alaska to the Aleutians and new blooms are detected every year.

Pseudo-nitzschia is a phytoplankton genus that can produce the toxin domoic acid. Domoic acid causes amnesic shellfish poisoning in humans and has been documented to cause severe neurological damage and death to marine mammals. 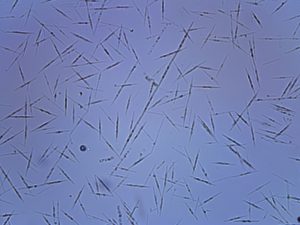 This is Pseudo-nitzschia from Kachemak Bay viewed under a microscope. Photo: KBNERR

Pseudo-nitzschia is common in Alaskan waters, but, unlike Alexandrium, blooms do not always produce toxins. There has never been a documented human case of amnesic shellfish poisoning in Alaska, although domoic acid has been found in the tissue of marine mammals harvested all over the state. Pseuodo-nitzschia blooms have rapidly become a severe threat in other West Coast states and may increase in severity here as our waters warm.

Alaska also has its share of non-toxic HABs. Hatchery managers across the state routinely monitor the abundance of the spiny genus Chaetoceros to avoid releasing young fish when their gills would be damaged by the spines. Large, chalky blooms of coccolithophores in the Bering Sea have been hypothesized to be detrimental to visual predators like seabirds and to be poor food for fish, but direct harm caused by those blooms has not been proven.

What’s the future of HABs? 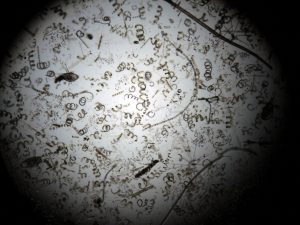 Chaetoceros, shown here, are non-toxic but can damage the gills of fish. Photo: KBNERR

The causes of many phytoplankton blooms are not well understood, so it is difficult to predict how Alaska’s risks from harmful algal blooms will change in the coming decades. With that caveat in mind, it is possible to make some broad guesses based on climate trends here and current conditions in other states. Climate change is likely to increase the threats of most HABs that threaten Alaska. Warmer waters extend the phytoplankton growing season, increasing the likelihood of multiple toxic blooms in a year or of toxic blooms in months that were traditionally considered “safe”. Warmer waters will also likely allow new potentially harmful phytoplankton species to expand their ranges to Alaska. Ocean acidification may also increase the risk of more severe harmful algal blooms, as Pseuodo-nitzschia has been shown to produce more toxins in lower pH water.

While HABs are likely to increase in Alaska in the coming decades, the negative impacts of those HABs could be sharply reduced by monitoring and adaptation strategies. To address the health and economic risks from HABs, communities, shellfish-growers, and researchers are already forming regional HAB monitoring groups. These groups routinely assess phytoplankton populations, looking to stop shellfish harvests before poisonings occur or to inform hatchery managers to about non-toxic blooms that could be damaging to their fish. Better monitoring will allow us to build better predictive models of HABs, as well as to identify areas that are refugias from toxic or other harmful blooms.

Learn more about what the AHAB group is doing to mitigate the risks from HABs on our “How We Monitor” page.