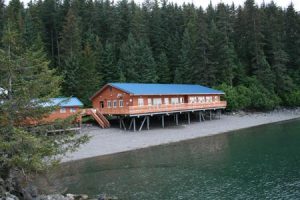 Kasitsna Bay Laboratory conducts regular monitoring for phytoplankton with a focus on species that are known to cause illness, such as Pseudo-nitzschia or Alexandrium.  We conduct weekly sampling at Kasitsna Bay from March through September, or later depending on bloom conditions.  From October through February we conduct monthly sampling while phytoplankton numbers are typically very low.  Monthly sampling occurs on across and along-bay transects in Kachemak Bay.  In addition, quarterly sampling is conducted on the east side of lower Cook Inlet with transects at Anchor Point, Flat Island, and Cape Adams.  Dominic Hondolero conducts the monitoring efforts.  After visual counts are conducted using a light microscope samples are then sent to Beaufort, NC and qPCR methods are used to estimate the abundance of Alexandrium.  Results are distributed through the AOOS Research Workspace, Kachemak Bay National Estuarine Research Reserve phytoplankton reports, and the Harmful Algal Bloom Information System for Kachemak Bay.