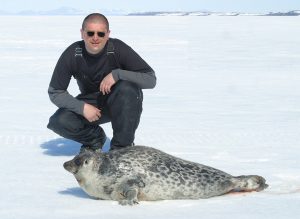 A cyanobacteria investigation was initiated in 2009 and completed in 2011 after large blooms occurred near Kotzebue.  These blooms were identified as the cyanobacteria, Aphanizomenon flos-aquae, Aphanizomenon sp., Nodularia sp., and Anabaena sp.  Toxins identified were microcystins (specifically microcystin-LR) and nodularins (specifically Nod-R).  Clams, mussels and snails were collected by the Tribe in 2016 and tested for PSP toxins and domoic acid at the Alaska State Environmental Health Laboratory, but none were found.

Because this is an emerging phenomenon the Native Village of Kotzebue plans on a frequent water sampling effort during the open water season of 2018 to test for microcystins and nodularins. Blooms generally occur mid-July through early September which is the core of the open water season (early June through early October).  Water samples will be processed using a vacuum manifold system and the samples will be tested at the State University of New York in Dr. Greg Boyer’s lab.  An attempt to collect shellfish will be made and processed at the Southeast Alaska Tribal Ocean Research (SEATOR) laboratory in Sitka.