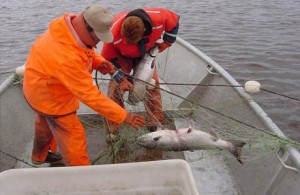 A joint research project between NOAA’s Auke Bay Lab and Alaska Department of Fish & Game (ADFG) has shown a strong correlation over the past 51 years between certain oceanographic conditions and salmon run timing. Over the past year, AOOS, ADFG and NOAA have partnered to help share data to further explore the ability of this relation to provide fisheries biologists with the best possible oceanographic information to manage the run.

How the Prediction Works

Over the past 50 years the first pulse of Chinook on the Yukon delta has occurred sometime between from the 6th and the 26th of June. In years when the first pulse comes late, it is reasonable for fishery managers to conclude that the run is very weak, perhaps so weak that fishing needs to be slowed or stopped altogether.  At the beginning of the fishing season, twenty days can be a long time to wait to find out when the fish are actually coming and if there are enough of them to harvest. Traditional knowledge on the Yukon holds that spring weather conditions, including ice, temperatures and wind determine when the fish enter the river, but each spring brings a different combination of conditions, so pinning down a schedule for the arrival of the first pulse can be tricky.

Biologists have been hard at work making predictions for the 2012 run. Using percent spring ice cover between St. Lawrence Island and the Yukon delta, April air temperatures in Nome, and marine surface temperatures just offshore of the delta in May, the members of the team predicted the timing of the run in the last two seasons to within three days of the actual timing before the start of each run. The forecast for 2012 is for a late run similar to that experienced in 2010, the first year of the pre-season forecast. So far this is unfolding as expected.

Read the story behind this year’s forecast