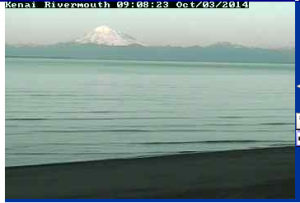 This screenshot shows the view from the webcam, overlooking Cook Inlet.

Headed down to the mouth of the Kenai? Find out real-time conditions and get a view of the water before you go.  A high-resolution webcam and weather station were installed in early October with the primary purpose of providing live footage of freshwater ice as it moves from the river into Cook Inlet.  The weather data is being streamed through the AOOS real-time sensor map and also transmitted over the Automatic Information System (AIS) navigation display for mariners. The webcam should be up and running by November 1.

The webcam and weather station are part of the Cook Inlet Forecasting Network, formed seven years ago by the Cook Inlet Regional Citizens Advisory Council, after a large pan of ice stripped the T/V/ Seabulk Pride from its Nikiski mooring.  The Kenai River camera will be the first in the network to offer public access to live images, providing a view of freshwater ice movement. Because freshwater ice is more dense that saltwater or brackish ice, the freshwater ice flushing from the Kenai River on the flood tide can move as far north as the Tesoro/KPL dock in Nikiski that services oil tankers transporting crude oil and refined petroleum. 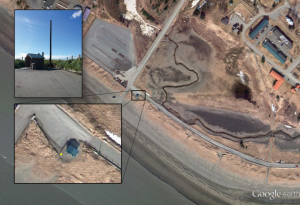 This map shows the location of the Kenai River webcam and weather station. The station was installed by the Cook Inlet RCAC in late September at the back corner of the public restrooms near the Kenai River beach access.

The installation of weather sensors and a transmitter to communicate directly with boaters on their AIS screens wll be completed by the Marine Exchange of Alaska (MXAK) as a part of their WX/AIS project. Archived sensor data can be found in the AOOS Ocean Data Explorer by adding the “historic sensors” layer from the search catalog.

Special thanks to the Cook Inlet RCAC, City of Kenai, MXAK, and Homer Electric Association for their generous contributions to this project. 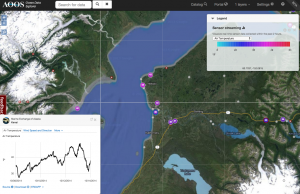 This screenshot of the AOOS real-time sensor map shows the last 7 days of air temperature at the station.